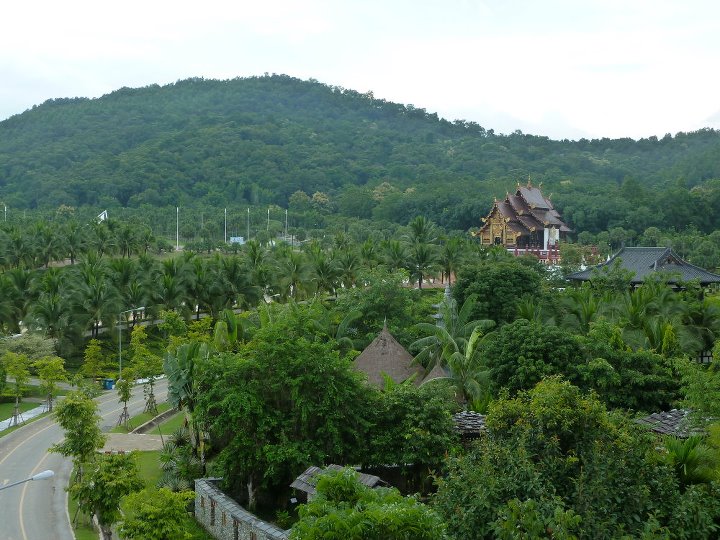 If you’ve only eaten Thai food at restaurants here in the U.S., you’ve barely scratched the surface of the unbelievable variety of fare available in Thailand. I’m not sure if you’ve noticed, but the majority of Thai restaurants here in the states have very similar menus. You’d be hard pressed to find a place that doesn’t serve Pad Thai, green curry, tom yum soup, or mangoes with sticky rice. It just doesn’t happen. Pick a favorite Thai dish and you can probably find it no matter where you choose to eat.

For someone who has lived in Thailand, this can be very frustrating. I can’t tell you the number of times I have walked into a Thai restaurant here in Seattle and been disappointed that some of my favorite dishes were not on the menu. Why is it so darn hard to find a bowl of khao soi?

The fact of the matter is that most Thai restaurants in the U.S. serve what is considered central Thai cuisine, or Thai food that comes from the central region of the country. Unfortunately, the other regions of Thailand bring some amazing flavor profiles, ingredients, and specialty dishes that no one includes on their menu!

Okay, I better not say no one. There are some delicious region-specific Thai restaurants out. There are also some restaurants that do a fantastic job compiling a variety of fare from all over the country, but generally speaking the majority of the US population has only experienced central Thai food.

And that, ladies and gentlemen, is a crying shame. You are being deprived.

Because of that, I’ve decided to do a blog series on the four regions of Thailand and the specific cuisine native to those areas. No one should have to miss out on all that yummy goodness!

First up, mainly because I want to share a phenomenal khao soi recipe with you, is the Northern region.

It is a beautiful area.

I took a trip up to the north with Cory when he came to visit. We rode an overnight bus so we went to sleep in Bangkok and woke up in Chiang Mai and I absolutely could not believe the difference in climate and topography when we arrived.

The climate in the northern region is much cooler than other parts of the country. It is part of the temperate zone and therefore has an abundance of vegetation. Green trees everywhere! And not just trees but all kinds of crops. Many of the northerners are agriculturists and because of this, northern cuisine is heavy in vegetables and fruit. They also have a large variety of roots and herbs that brings a sour and bitterness to dishes of the north. These flavors also show a heavy influence from the bordering countries of Myanmar and Laos.

The cool weather also makes it very difficult to sustain the growth of coconuts so instead of making dishes based on coconut milk, food in this region is broth or water-based making curries and soups thinner and less creamy. Less creamy isn’t a bad thing though. Northern cuisine has a fantastic flavor profile and brings some unique characteristics to the table.

Another regional specialty of the north is spicy pork sausage which you can find just about anywhere in that region. I’ve only had it once but it was delicious! It’s often served with some north specific chili pastes like nam prik noom and nam prik ong. Pork in general is popular and often substitutes for chicken and beef that are used regularly in other parts of the country. That doesn’t mean you can’t find chicken and beef though – they do still use a variety of meats and proteins.

Finally, the preferred rice of this region is glutinous rice, otherwise called sticky rice. It is often eaten with the hands by rolling it into small balls and dipping into dishes or a variety of delicious sauces. Delish!

So, there you have it – northern Thai cuisine. Interested in giving some of these dishes a try? Next time you’re at a Thai restaurant order from the list below.

There are tons of additional northern Thai dishes but they can be difficult to find in restaurants. In order to try these you’ll probably have to find a region-specific restaurant such as Pok Pok in Portland (and New York) or Pestle Rock in The Ballard area of Seattle. Pok Pok specializes in northern and northeastern Thai food and while Pestle Rock is technically an Isaan (northeastern) restaurant they have a number of dishes that would be considered northern as well.

That last one on the list, khao soi, is one of my all-time favorite Thai dishes. I searched far and wide for an amazing recipe, one that captured the intense depth of flavor that I found in a tiny little restaurant on a street corner in Chiang Mai … and I’ll happily say that I found one!

I can’t take credit for this recipe in any way. It’s from the March 2013 issue of Bon Appetit magazine and after finding it, making it, and trying a few tweaks to see if I could adjust it to my personal liking (more than just the typical variance in fish sauce or sugar) I just couldn’t do it. This recipe is exactly the way I like my khao soi … hearty, filling, and aroi mak!

It takes a bit of prep but it is absolutely delicious and you’ll find yourself wanting to make it over and over again. 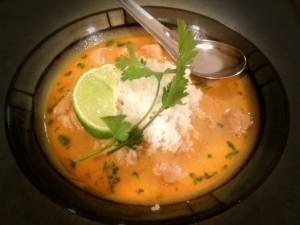 Add chicken, 3 tablespoons fish sauce, and sugar to soup. Season with salt or more fish sauce, if needed. Divide soup and noodles among bowls and serve with toppings.

Error: Twitter did not respond. Please wait a few minutes and refresh this page.